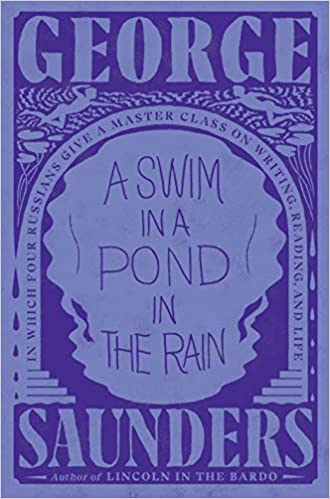 Before George Saunders turned his attention to literature he studied engineering at the Colorado School of Mines. Engineers are fascinated by the way things work. In his latest book, A Swim in a Pond in the Rain: In Which Four Russians Give a Master Class on Writing, Reading, and Life, Saunders takes the reader on a under-the-hood tour of seven short stories written by four Russian masters of the form: Anton Chekhov, Leo Tolstoy, Ivan Turgenev, and Nikolai Gogol. Saunders pops covers, opens panels, and traces wiring to show how these stories work, and why they still resonate with readers.

Saunders is uniquely qualified to guide readers on this expedition. For over twenty years at Syracuse University he has taught these stories and others to some of the best young writers in the United States. He was a student in the program himself, learning from Tobias Wolff. Nor does it hurt that Saunders is a modern master of the form, with collections like Tenth of December, CivilwarLand in Bad Decline, and Pastoralia to his credit. For Saunders, a well-executed short story is a precious thing.

A Swim in a Pond in the Rain is one of the most delightful books I’ve read in a long time. Ostensibly about the craft of writing, it’s also about reading and the magical, intimate exchange of ideas, feeling, and emotion that takes place between reader and writer. It’s about learning, with the benefit of an engaging, astute guide, to react to a story, feeling it’s impact upon our minds and hearts. The seven stories are reprinted in their entirety, and are followed by essays (Saunders refers to them as Afterthoughts) full of insight, humor and the humanity that readers familiar with George Saunders will recognize. Fundamental questions are asked and answered, such as, what is a story, anyway? “A story is a series of incremental pulses,” answers Saunders, “each of which does something to us. Each puts us in a new place, relative to where we just were.” That’s why we read, isn’t it? To go beyond where we are and see the world and our fellow human beings from a different perspective.

What Saunders helped me rediscover and appreciate is the practice of close reading as opposed to cursory, superficial reading. The difference between the two was illustrated with the story “Gooseberries” by Anton Chekhov. I’d read “Gooseberries” a few times before, but until Saunders guided me through its structure and subtleties I didn’t experience its deeper meaning. It was as if Saunders had slipped me the combination that unlocked the story and exposed not only its heart but Chekhov’s mastery. As Saunders writes, “A story means, at the highest level, not by what it concludes but by how it proceeds.” Now I understand why “Gooseberries” proceeds as it does.

In Afterthought #7 Saunders reflects on the magic that happens between writers and readers. He pictures them standing at opposite ends of a pond. The writer tosses a pebble in and watches the ripples move toward the reader on the other side, and imagines how the reader is receiving those ripples. In that imagining the writer decides which pebble to drop in next. The reader receives the ripples, and if they  speak to him or her, a connection between writer and reader forms. The essence of this activity is ascertaining whether connection is happening, where it happens, and why. “Those two people, in those postures, across the pond,” writes Saunders, “are doing essential work. This is not a hobby, pastime, or indulgence. By their mutual belief in connection, they’re making the world better, by making it (at least between the two of them, in that small moment) more friendly.”

The reverence George Saunders has for these Russian masters is evident, and even after teaching them for decades they continue to captivate him. It doesn’t matter that the stories are set in a bygone Russia. They work because at their heart live characters who act and react in all their human complexity, confusion, contradiction, and beauty, and because they were conceived and executed by master story-tellers.

In Love: A Memoir of Love and Loss by Amy Bloom

Our Little World by Karen Winn

The Naked Don’t Fear the Water by Matthieu Aikins

The Ninth Decade: An Octogenarian’s Chronicle by Carl H. Klaus

What Do I Know? by Jack Remick